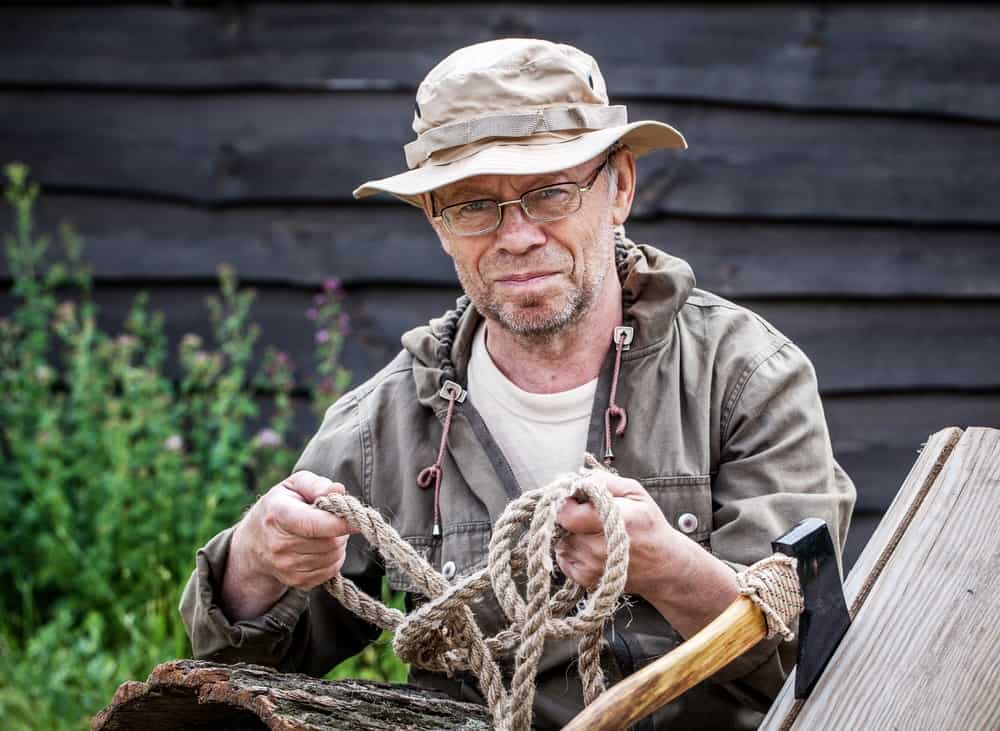 These knots are great for everyday use at home and at work (depending on your job) and are also great to know for camping and survival purposes. You’ll be able to construct shelters, traps and snares, weapons and tools, and other devices, you should have a basic knowledge of ropes and knots and some of the terminology used with them.

Bight. A simple bend of rope in which the rope does not cross itself.

Dressing the knot. The orientation of all knot parts so that they are properly aligned, straightened, or bundled. Neglecting this can result in an additional 50 percent reduction in knot strength. This term is sometimes used for setting the knot, which involves tightening all parts of the knot so they bind on one another and make the knot operational. A loosely tied knot can easily deform under strain and change, becoming a slipknot or, worse, untying.

Lashings begin and end with clove hitches. Lay. The lay of the rope is the same as the twist of the rope. Loop. A loop is formed by crossing the running end over or under the standing end to form a ring or circle in the rope.

Pigtail. That part of the running end that is left after tying the knot. It should be no more than 4 inches long to conserve rope and prevent interference. Running end. The free or working end of a rope. This is the part of the rope you are actually using to tie the knot.

Whipping. Any method of preventing the end of a rope from untwisting or becoming unwound. It is done by wrapping the end tightly with a small cord, tape, or other means. It should be done on both sides of an anticipated cut in a rope before cutting the rope in two. This prevents the rope from immediately untwisting.

Wraps. Simple wraps of rope around two poles or sticks (square lashing) or three poles or sticks (tripod lashing). Wraps begin and end with clove hitches and get tighter with fraps. All together, they form a lashing. 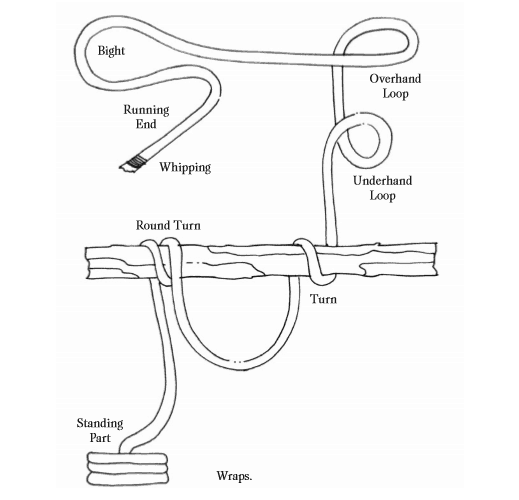 The 10 basic knots and methods of tying them that you should know for survival purposes are as follows:

This is the simplest of all knots, and it used to be the safety, or finishing, knot for all U.S. Army knots. Because it had a tendency to undo itself without load, it has since been replaced by the overhand. 2. Overhand. This is the simple knot that most people tie every day as the first step in tying their shoes. It can also be used to temporarily whip the end of a rope.

This knot should replace the half-hitch as a finishing knot for other knots. This knot alone will reduce the strength of a straight rope by 55 percent.

A good, simple knot for general-purpose use, the square knot is basically two overhand knots that are reversed, as in right over left, left over right. It is used to tie the ends of two ropes of equal diameter together (just like your shoelaces) and must be secured with an overhand on both ends. It is easy to inspect, as it forms two loops and is easy to untie after being loaded. 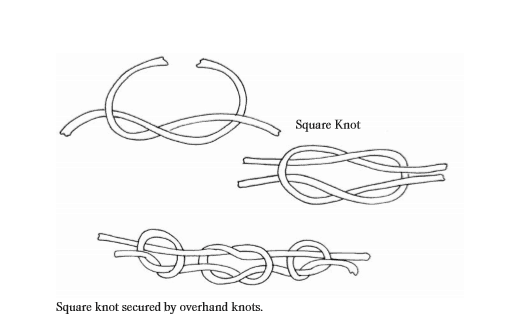 3. Round turn and two half-hitches.

This is the main anchor knot for one-rope bridges and other applications where a good anchor knot is required and high loads would make other knots jam and be difficult to untie. It is used most frequently to anchor rope to a pole or tree. 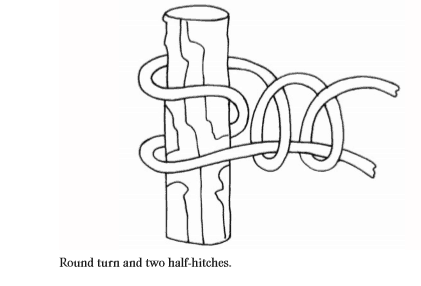 These knots can be used to fasten a rope to a tree or pipe, and they put little strain on the rope. They are easy to anchor knots, but tension must remain on the knot or they will slip. This can be remedied by making another loop around the object and under the center of the clove hitch. 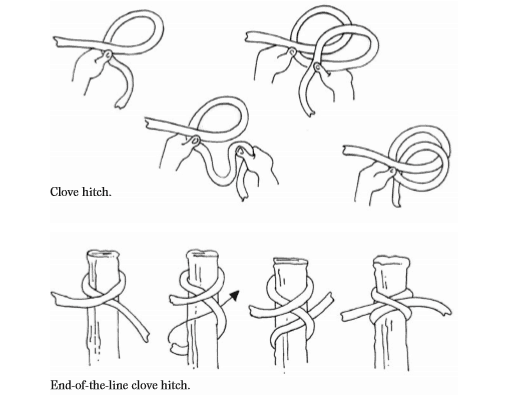 A method of shortening a rope, a sheepshank may also be used to take the load off a weak spot in the rope. It is a temporary knot unless the eyes are fastened to the standing part of the rope on both ends. 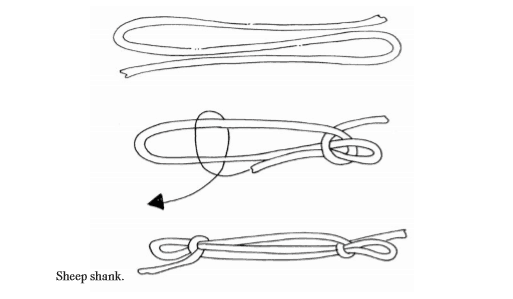 This knot is used to tie together the ends of two ropes of equal or unequal diameter. It will also join wet rope and not slip or draw tight under load. It can be used to tie the ends of several ropes to the end of one rope. When a single rope is tied to multiple ropes, the bight is formed with the multiple of ropes.

When tied with an end of the rope, the knot is finished off with a bowline. The non-slip nature of the knot on another rope allows the climbing of ropes with footholds. It can also be used to anchor ropes or the end of a traction splint on a branch or ski pole. 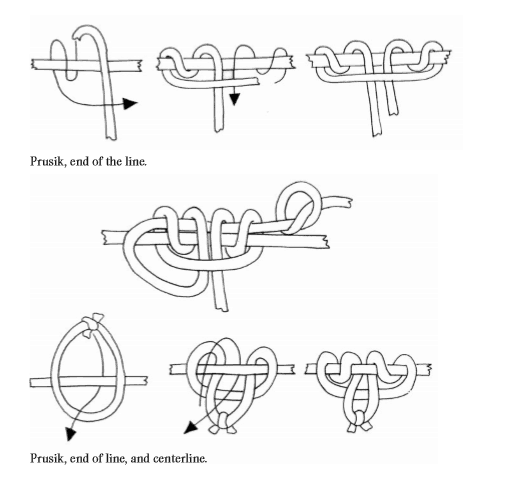 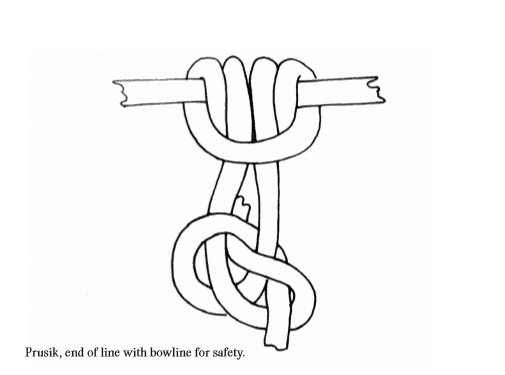 8. Bowline and bowline finished with an overhand knot.

The around-the-body bowline was the basic knot used for rescue for many years, as it provided a loop to place around a body that would not slip or tighten up under strain. It has been replaced by the figure eight in most applications because the latter does not weaken the rope as much. 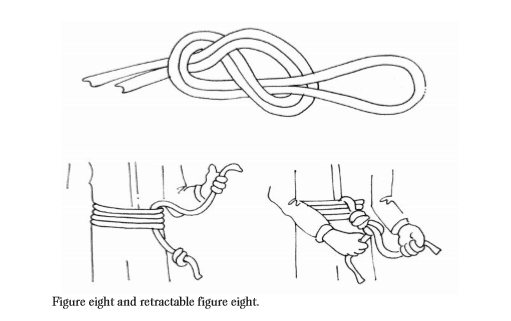 This knot is the main rescue knot in use today. It has the advantages of being stronger than the bowline and easier to tie and check. One disadvantage is that when wet it may be more difficult to untie than the bowline after being stressed. The figure-eight (or figure of eight) can be used as an anchor knot on fixed ropes. It can also be used to prevent the end of a rope from slipping through a fastening or loop in another rope when a knot larger than an overhand is needed.

Hello, I’m M.D. Creekmore. I’ve been interested in self-reliance topics for over 25 years. I’m the author of four books that you can find at Amazon.com as well as Barnes and Noble. Over the years, I’ve learned a lot about prepping, homesteading, and self-reliance topics through first-hand experience and now I want to share what I’ve learned with you. You can also subscribe to my YouTube channel here. The prepper’s manual covers everything that you must know to survive and thrive during and after a disaster such as a long-term grid-down situation. THANKS FOR VISITING MY SITE!